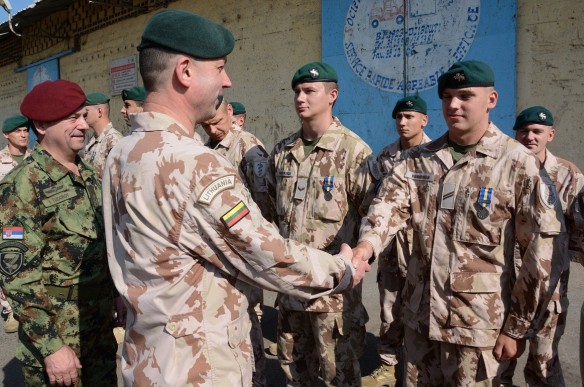 Are Lithuanians with dual citizenship drafted to Lithuanian army?

When a young man is restoring his Lithuanian citizenship he thinks of the possibility to be drafted to serve in the army. But is this really a question to worry about?

Generally speaking, all young men can be subject to military service, but not all will serve.

Lithuania has a military requirement that was re-introduced in 2015, because of the geopolitical situation. However, it is difficult to imagine that Australian or American with Lithuanian citizenship would be actually forced to serve in Lithuanian army unless he voluntarily decides to join. Why is it so?

Currently 19-26 year old Lithuanian men can be drafted. Army service lasts 9 months, but priority is given to the persons who voluntarily decide to join the armed forces. In practice it means that, only around of 2% men in the eligible age group are asked to join the army every year, but much smaller percentage actually joins the army. There are about 150.000 men in the draft age group, only 30.000-38.000 of them were randomly selected for the draft list, but there will be only 3000 persons drafted for the army per year. In many regions the draft is stopped since enough people decide to join the army on voluntary basis and there is no need to draft any additional persons. In fact even though the draft was formally announced in 2015, there were enough volunteers during the years 2015 and 2016 to fill all the available places in the army. It looks like that this year, there will be no need to draft anyone if they do not volunteer.

What to do if you are randomly selected during the draft?

Even if the person is randomly selected from the draft list, he can request to postpone the army service for the following reasons:

b) work, and being drafted for 9 months would mean that he would lose a job;

c) there would be a significant financial damage incurred by the person, if they were drafted – for example, it would be very expensive to fly from another country to Lithuania and back;

d) if a person does not speak Lithuanian, so it would be technically difficult and expensive to ensure that he could complete his military service without a translator;

If army service is postponed, then next year the person might get on the list again (and ask for postponement again) or they may not get on the list at all (it is randomly generated each year). In all the cases the final decision is being made by the special committee, so you would have to write a letter with the supporting documents explaining why you cannot join the military if you are randomly selected.

To summarize, any 19-26 year old male, Lithuanian citizen can get on the draft list. However, considering number of volunteers that are willing to join Lithuanian army, it is very unlikely that a person selected for the draft would be actually asked to join the army. In case he does, however, he would be able to ask to for a permission not to join the army due to lack of knowledge of Lithuanian language and travel costs. Besides restoring citizenship of the country of your ancestors Lithuanian citizenship can give you and your family members a number of tangible benefits. Having dual passport can also have a positive effect on your personal and economic freedom. Having double or even multiple citizenship – is an important step in internationalizing your life so that no one government can. Hence, if you have Lithuanian ancestors, you may well qualify for dual Lithuanian Citizenship. If this law change is of interest to you and you have any questions, please contact us now.

We are ready to guide you through the application process. Feel free to get in touch with us even if you do not have complete documentation, but you know your ancestors came from Lithuania. We are able to find missing documents and get Lithuanian citizenship for our clients even in the most difficult cases.